Demand is the quantity of a good or service that customers want to buy.  We all may want a brand new Ferrari, speedboat and a mansion on a private island, but we can’t all afford them.  Our wants become a demand when we have the money to back up our desires. This is called effective demand, in other words, what customers are prepared and able to buy at a particular price.

The Shape of the Demand Curve

The table below shows a class’s weekly demand for 500ml bottles of Coca Cola between 20p and £1. 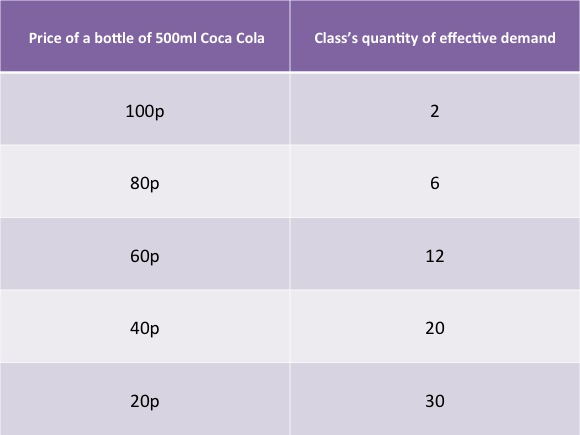 This demand can be plotted on the chart below. 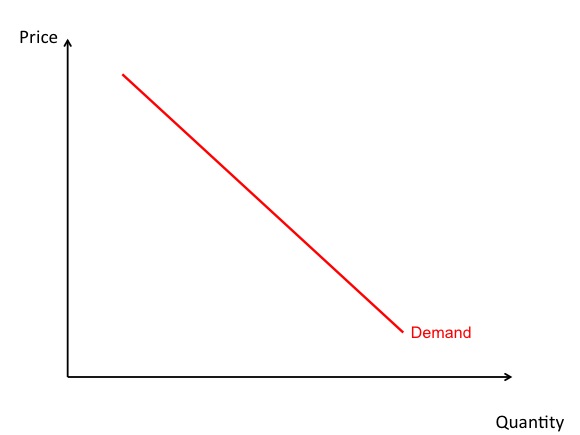 The market demand curve also shows an inverse relationship between price and quantity.

Another way of explaining why the demand curve is downward sloping is to calculate how much satisfaction you get from consuming increasing quantities.  If the amount of utility from consuming a good falls, a rational consumer would only be prepared to pay a lower price.  Utility is measured in utils – the higher the number of utils, the greater the satisfaction.

It is possible to calculate how much of a good you will purchase by checking the price in a shop.  Assuming the price of a Mars Bar is below what you’re prepared to pay for one chocolate bar, you will keep consuming until the satisfaction you receive is worth less than the price Mars are charging.  For example, if the satisfaction you will get from the fourth Mars Bar is worth 40p and the Mars Bar costs 50p you wouldn’t but it.  If the price a shop charges in above what you are willing to pay for one Mars Bar then, as a rational consumer, you won’t demand any Mars Bars.

Movements Along the Demand Curve

Shifts in the Demand Curve

A change in price will lead to a movement along the demand curve, whilst a change in any other factor could cause a shift in demand. 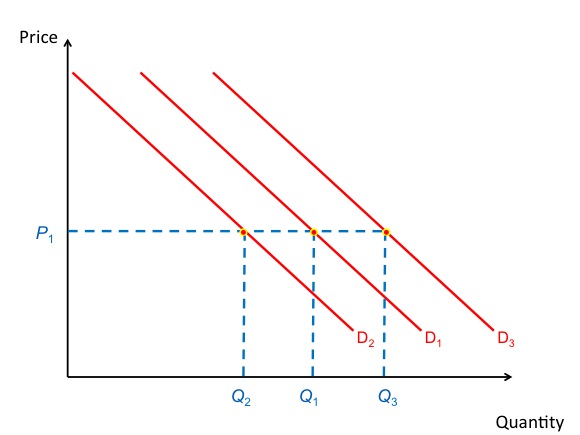 There are a number of general factors highlighted economists that will lead to a shift in the demand curve.

The price of Substitue goods

The price of complement goods

Advertising aims to influence customer decisions.  An effective campaign will lead to an increase in demand.

Goods and services will frequently move an out of fashion affecting the level of demand.

If the quality of the good improves then you would expect to see demand shifting to the right as more people would want to buy even if the price remained the same.

Changes in the Weather

The demand for some products is heavily influenced by the weather, for example, when the temperature rises above 18 degrees, sales of Bacardi Breezer rise by 8% for every extra degree!

Changes in the Law

Many commodity markets, such as oil and gas, are affected by what traders think will happen to prices in the future.

This applies when a good is demanded for two or more distinct uses, for example, steel is used in the production of cars and ships.